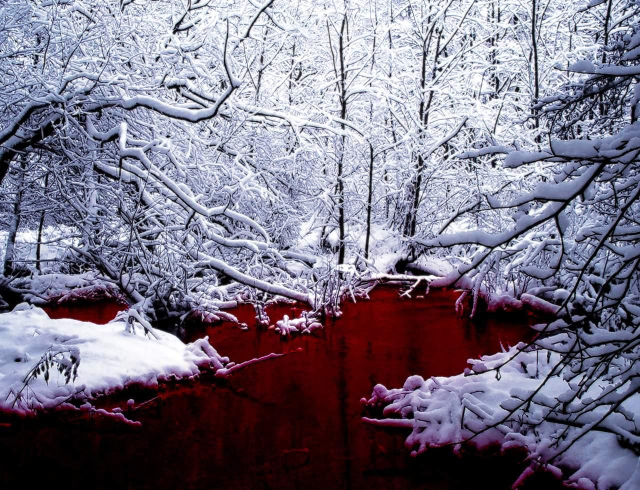 SCP-354 as it was originally discovered.

Due to SCP-354’s immobile nature, Area-354 has been built around it. Area-354 houses forces and D-class personnel prepared to deal with threats emerging from SCP-354, as well as researchers studying SCP-354 and its properties. For their own safety, no on-site personnel are to approach SCP-354 at any time. Direct interaction with SCP-354 is permitted only for the purpose of research to eliminate SCP-354 and must be approved by O5 personnel.

Area-354 was constructed to contain and neutralize any and all further threats emerging from SCP-354. At the heart of Area-354, a twenty (20) foot wall of concrete reinforced with [DATA EXPUNGED] has been constructed around SCP-354 to prevent emerging entities from escaping into the area at large. High-speed motion detection cameras are placed atop the wall looking down into the pool, and armed guards can easily shoot down into the enclosure from catwalks placed above the pool.

SCP-354 is a pool of red liquid discovered in northern Canada. The liquid is of a consistency similar to that of human blood (hence the colloquial name Blood Pond) but is not of a biological nature. The pool does not have definite banks; soil mixes with the liquid until, at a certain point, there is more soil than liquid and the ground is mostly solid. The liquid becomes denser as one descends deeper into the pool; if the pool has a bottom, it has yet to be reached.

Periodically, entities emerge from the pool and attempt to escape from the enclosure. Thus far, nearly all creatures emerging from SCP-354 have been extremely hostile and highly dangerous.

SCP-354 is believed to have been first discovered in ████ by survivors of a plane crash, who encountered SCP-354 by chance. SCP-354 had developed into a local urban legend long before Foundation personnel arrived to deal with the threat.

After locating the source of the legend, SCP personnel set up Watch Station Epsilon-38 to monitor the pool and to deter future travellers from finding it. SCP-354 was classified as Euclid until its properties were further discovered.

SCP-354-2: Bear-sized mammalian creature covered in razor-sharp spines. Resembled an echidna. Was virtually bulletproof, but was unable to escape the enclosure surrounding the pool. Neutralized via napalm.

SCP-354-6: Appeared to be a human male of Indian descent. As the enclosure around the pool had not yet been fully repaired, SCP-354-6 was immediately shot before it had a chance to escape. Area Head Dr. ██████ has expressed his displeasure in the rash execution of SCP-354-6, which testing revealed to be identical to an average human being.

SCP-354-14: Majority of creature’s body remained well beneath the surface of the pool. Five (5) octopus-like tentacles were seen emerging from the pool and reached up over the enclosure. Several D-class personnel were grabbed by the tentacles and pulled back beneath the surface of the pool. After receiving massive damage from gunfire, SCP-354-14 retreated back into the pool and disappeared. No personnel taken by the creature were recovered.

SCP-354-15: Feline creature composed of a blue-hued crystalline structure later revealed to be ice. Was able to jump above the walled enclosure and was agile enough to dodge most gunfire. Was actively hostile and mauled any personnel that engaged it. Subject engaged SCP-354-16 upon its emergence from the pool and was terminated in the fight.

SCP-354-16: Feline creature composed of a dark red-black stone later revealed to be partially solidified magma. Gunfire proved mostly ineffective against its hide. Was not hostile to personnel and did not attempt to escape the walled enclosure until being engaged by SCP-354-15. Successfully terminated SCP-354-15 and grew less active as its body cooled. After fully solidifying and having remained motionless since, subject was moved to Dr. ██████’s office for aesthetic purposes.

SCP-354-18: Metallic humanoid machine described by several D-class personnel as a «Terminator.» Subject possessed a cloaking device rendering it invisible to human eyes. Subject was highly adept at combat and killed nearly 90% of Area-354’s guard personnel as it rampaged through the facility. Approximately sixty (60) minutes after emerging from the pool, subject ceased function and powered down. Subject was dismantled and its power cell was disposed of. Subject’s remains are under study.

Note from Area Head Dr. ██████: That’s thrice now that we’ve had to fall back on Pandora’s Box to deal with stuff coming out of SCP-354. Able can’t complain, though… you can tell he enjoyed fighting SCP-354-11. Maybe we should set up some kind of «hotline» to MTF Ω-7?

Note from Area Head Dr. ██████: It has been twenty-two months since the last entity emerged from the pool. Before this, the longest period of time between emergences was eight months. I suspect this means one of two things. Either the Red Pool has «died» or «powered down» or whatever the correct term for it is; or it is «charging up» for something big to come through. O5 believes the former is the most likely explanation, and has recalled 30% of our total personnel and cut 25% of our funding. While I can only hope that they are correct, if the latter situation is true, we’re soon to face some terrible monstrosity and we won’t have anywhere near the force necessary to deal with it. I worry for all of our safety.

Document 354-4: Event Log 354-20
In the morning of [DATA EXPUNGED] the entire staff of Area-354 evacuated the facility. However, the staff also shut down power to the area and took a number of supplies and vehicles from the facility, indicating that the evacuation had not been done due to an emergency. Mobile Task Force Theta-12 was dispatched to investigate the cause of the evacuation and, if possible, make contact with Area’s staff. However before MTF Θ-12 could make contact with Area-354 or its evacuees, the Area’s on site warhead was detonated, resulting in the destruction of the entire facility and the deaths of [DATA EXPUNGED].

MTF Θ-12 was ordered to make contact with the evacuated personnel and, in the event of hostility, was given clearance to terminate any uncooperative personnel. A large convoy of vehicles taken from Area-354 was spotted heading southward from Area-354 at high speed. Final audio logs from MTF Θ-12 indicate that the convoy was made up of Area-354’s staff, and that the previous chain of command had broken down in its entirety, with armed D-class personnel and research personnel firing upon MTF Θ-12. MTF Θ-12 was annihilated and no further contact with the former personnel of Area-354 has been made since.

Document 354-5 Following the total destruction of Area-354, the Red Pool Containment Site was constructed in its place. Basic maps of the new facility can be found in ████████-███-█ and ███-████-█████████. Unlike the previous facility which was focused on research and neutralization of entities emerging from SCP-354, the new facility is devoted entirely to the containment of SCP-354 and entities which may emerge from it, as well as any unforeseen forces which it may create directly. This is due largely to the advisement of the new Site Head [DATA EXPUNGED] who believes that the events of Log 354-20 were the result of a psychic or mental attack generated by SCP-354 itself.

Dr. ██████████: Is it all right if I record this?

Dr. ██████████: Good, good. (pause) So, let’s start at the beginning. What happened at the Red Pool containment site?

Agent ████: Looking back now… it seems strange that nobody ever suggested draining the pool. When Dr. ████ came up with it… it seemed like such a good idea at the time.

Dr. ██████████: Exactly what about the idea was so appealing?

Agent ████: It was a way out. That SCP entry… I’ve read what it says. It’s a joke. It makes it seem like we have the pool under control.

Dr. ██████████: I take it you do not?

Agent ████: There’s a half meter slab of reinforced concrete in place over the pool. And yet every time some beast tries to come through somehow it manages to get loose into the building. People die, every single time. I’ve seen [DATA EXPUNGED] a man’s own intestines. Can you imagine what that looks like, old man?

Dr. ██████████: So to you, and of course to the other people stationed at the Red Pool containment site as well, draining the pool seemed like a fine solution to the suffering caused by SCP-354.

Dr. ██████████: Please, sit down. This is going on record. (pause, Agent ████ sits) So, O5 approved the draining of SCP-354, and then what happened?

Agent ████: They evacuated the nonessential personnel to a location a couple kilometers away, leaving just basic defense crew and the people who’d run the equipment. Mostly D class, plus a few Agents to keep things going.

Dr. ██████████: And you were among those Agents.

Dr. ██████████: How did they go about draining the pool?

Agent ████: Tech guys brought in this big pump thing with all these hoses. We retracted the slab, but… (pause)

Agent ████: Have you ever had a dream, where it seemed so real, but you knew you were dreaming, and it felt like you had to wake up to escape from it?

Dr. ██████████: I can’t say I have.

Agent ████: Yes you have, we all have. That’s what it felt like when they put the hose in to try to drain it. Everything stopped being real. It was like we had to escape right now.

Dr. ██████████: And you were the only one feeling this sensation?

Agent ████: No, everyone had it at the same time. It came from the fucking pool!

Dr. ██████████: Please, lower your voice. What happened when they activated the pump?

Agent ████: We never did. We couldn’t. It wouldn’t let us.

Dr. ██████████: What wouldn’t let you?

Dr. █████████: Please, I ask you to lower your voice.

Agent ████: Up until now it’s been content just throwing monsters at us. It’s been playing. But now we have it locked up and we just tried to execute it! Now it’s angry!

Agent ████: My buddy measured its banks once and compared them to the photos from its first discovery. You know what he found? (Agent ████ grabs Doctor ██████████)

Agent ████: It’s growing! The pool is growing! It gets bigger and stronger every day and now we’ve made it angry! Get your hands off-

Dr. ██████████: Sedate him. We’ll continue this in the morning, if he’s lucid by then anyway. 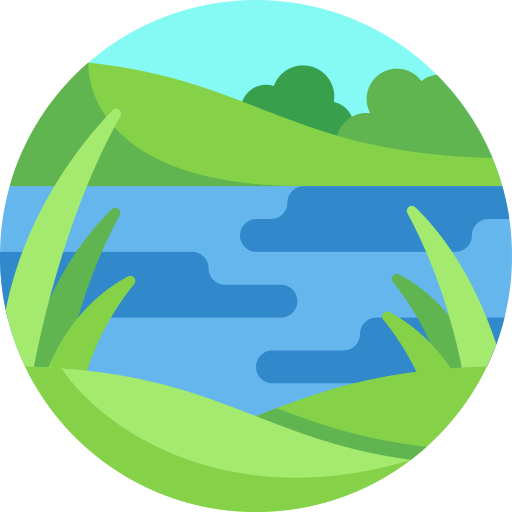